Putting the spotlight on firmware malware

Firmware malware has been a hot topic ever since Snowden's leaks revealed NSA's efforts to infect BIOS firmware. However, BIOS malware is no longer something exclusive to the NSA, Lenovo's Service Engine or Hacking Team's UEFI rootkit are examples of why the security industry should put some focus on this strain of badness.

To all effects BIOS is a firmware which loads into memory at the beginning of the boot process, its code is on a flash memory chip soldered onto the mainboard. Since the BIOS boots a computer and helps load the operating system, by infecting it attackers can deploy malware that survives reboots, system wiping and reinstallations, and since antiviruses are not scanning this layer, the compromise can fly under the radar. 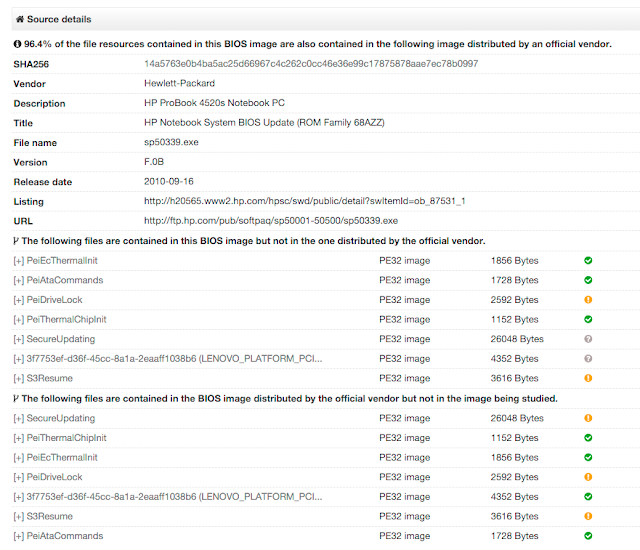 What's probably most interesting is the extraction of the UEFI Portable Executables that make up the image, since it is precisely executable code that could potentially be a source of badness. These executables are extracted and submitted individually to VirusTotal, such that the user can eventually see a report for each one of them and perhaps get a notion of whether there is something fishy in their BIOS image. Additionally, the tool will highlight which of these extracted PEs are Windows targeted, i.e. they will run on the Windows OS itself rather than on the UEFI pseudo-OS. Usually you would not see Windows executables in this layer, though there are some exceptions like the following case:
https://www.virustotal.com/en/file/b3387bca327350038ef455d80ca22833e5d7a5173f0b52300b50fcce78ba0d22/analysis/

As you can see, the report distinguishes between any kind of PE and PEs that will run on the Windows OS itself, the first one of which happens to be detected by a noticeable amount of antivirus vendors. This executable is actually an antitheft product called Computrace, embedded in many BIOS in order to be able to track a system after theft, even if the system is wiped and reinstalled. Totally legit when used for this purpose.

https://www.virustotal.com/en/file/4db9177af43a958686b9367f19df90023acf3189c388497a8a7d1d8cb3f7f0e0/analysis/
You will notice that this is precisely the Lenovo rootkit case. They are two different BIOS updates for Lenovo S21e laptop systems, the second one removes what was identified as factory-installed malware, taking a closer look at both reports you will notice that the first image contains a NovoSecEngine2 Windows executable in charge of deploying further artifacts onto the target system.

Knowing that this new tool is available, the next interesting step would be to be able to dump your own BIOS in order to further study it by submitting it to VirusTotal, the following tools might come in handy:
https://bitbucket.org/blackosx/darwindumper/downloads
https://github.com/chipsec/chipsec
https://www.blackhat.com/docs/us-13/US-13-Butterworth-BIOS-Security-Code.zip
https://flashrom.org/Flashrom

Obviously, this has its limitations, the system could be compromised in such a manner that the dumpers are deceived, you should understand that the ultimate ground truth is physically attaching to the chip and electronically dumping the flash memory.

When performing BIOS dumps and uploading to VirusTotal make sure you remove private information, certain vendors may store secrets such as WiFi passwords in BIOS variables in order to remember certain settings across system reinstalls. If you are on a Mac, DarwinDumper will allow you to easily strip sensitive information by checking the "Make dumps private" option. 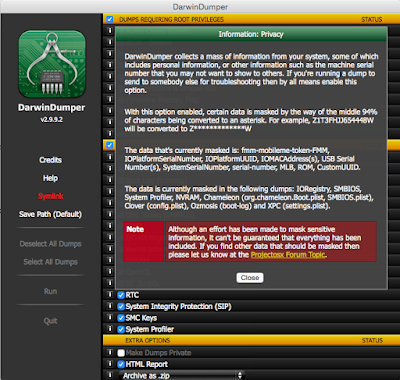 Premium users of VirusTotal Intelligence and VirusTotal Private Mass API will soon be able to read a follow-up article in Intelligence's blog in order to understand how all of this information is now indexed and searchable, allowing you to track down advanced actors making use of BIOS badness in order to persist in their targets' systems.


We would like to specially thank Teddy Reed, developer of the UEFI firmware python parser, he has been instrumental in helping us overcome our ignorance about BIOS, UEFI, and its ecosystem.
Published by Unknown