The rising tide of malware threats has created an arms race in security tool accumulation, this has led to alarm fatigue in terms of noisy alerts and false positives. The last thing you need is more false alarms coming from buggy or suboptimal YARA rules, be it the ones you use in VT Hunting or the ones that you feed into your own security defenses.

As you may already know, VT Enterprise incorporates a component that allows you to match your own YARA rules against all newly uploaded files (Livehunt) as well as back in time against our historical malware collection (Retrohunt).

A common challenge for YARA users is that of potential false positives. False positives can have a negative effect on a users Livehunt feed by producing incorrect results. Similarly, a buggy rule can be a waste of your Retrohunt quota, and given that Retrohunt jobs are lengthy, it is also a waste of time. Since many security tools incorporate YARA these days, some users will be launching their rules against a fleet of machines that they manage, meaning that a buggy rule can be a big waste of resources.

In order to address this common pain point we are releasing a new Retrohunt feature: fast hunting over a goodware corpus. When you launch your Retrohunt jobs you can now select the corpus on which it should act: 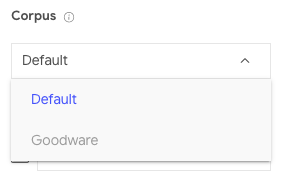 The goodware corpus is a set of 1M files chosen from the NIST National Software Reference Library, accounting for 147GB. Jobs launched against this collection usually finish in under a minute. As such, we imagine that users may be modifying the way they use VT Hunting. Before writing a Livehunt YARA rule or launching a Retrohunt job, they probably will want to test it against this corpus and tweak the rule in order to prevent false positives and avoid unnecessary and lengthy Retrohunt iterations.

In an effort to give back to the community behind VirusTotal and its premium services, we are making this feature entirely free. In other words, Retrohunt jobs against the goodware corpus do not consume Retrohunt quota.

This new feature builds upon some major improvements that have been recently released such as the new API endpoints to programmatically interact with VT Hunting. Stay tuned, soon we will be announcing far bigger enhancements to Retrohunt, you can take a sneak peek in our 2019 roadmap (Lightning-fast retrohunt).
Published by Emiliano Martinez